We said ‘No’ to insecticides on the olive trees. What happened next? 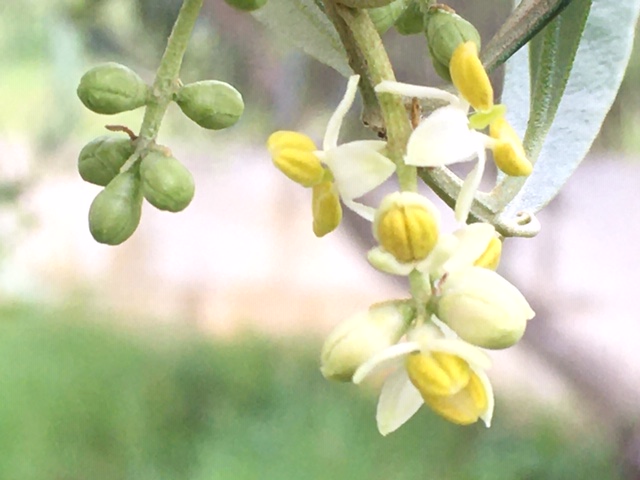 I have become increasingly drawn to books which reveal, what has been known by ancient cultures for eons but which is only now being proven by research, that we humans are inextricably linked with every other living thing on this planet. Hence, whatever we do has a knock-on effect on the tallest tree and the minutest microbe deep underground, potentially impacting on our ability to sustain ourselves with the food these other living entities generously produce.

Some might put it down to chance, others to some kind of universal synchronicity but, this year, we’ve seen first-hand what this really means.

Before you sign out for fear of yet more doom and gloom, fear not, this story has a happy ending.

Once upon a time, about 4 weeks before lockdown to be precise, we moved from a lovely but rather damp and mouldy village house to a small finca with an olive grove. ‘Finca’ simply means a plot of rural land. Ours has a small house and over 100 olive trees planted neatly in rows.

Now, I love the olive trees. Walking, cycling and generally throwing myself around them when we were confined to our homes for 8 weeks just about kept me sane. I spoke to them, hugged them and thanked them for just always being there. However, I don’t like trees planted in rows. It all looks a bit clinical and vulnerable. I yearned for the apparent disorder but seamless organisation of a natural woodland.

When we first visited the property, grass and wild plants grew beneath the trees. So, the day we moved in, we couldn’t believe what we saw. All that remained was brown barren dirt thanks to a liberal spraying of herbicides across the entire property, with the exception of a small corner where we’d expressed a desire to dig a vegetable patch.

Fast-forward a few months. The olive blossom had dropped (I admit I had no idea that olive trees blossomed until then) and it was time for the trees to be ‘sprayed’. A rally of uncomfortable messages passed between us and the landowner in an attempt to tease out exactly what this ‘spray’ contained. Of course, her priority was crop size, whilst ours was the proximity of the trees to us, our cats and our veg patch, plus the impact on the trees and all green things surrounding them, which were now doggedly growing back.

A quick aside. The lack of plant competitors resulting from the comprehensive herbicide ‘treatment’ meant the opportunistic spread of a particularly vicious ground-hugging plant called ‘puncture vine’. This vine is covered in the sharpest and most evil pea-sized nail bombs which pass effortlessly through a flip flop. One has to wonder whether they would have been quite so prolific had other less resilient plants not been poisoned to death.

Back to the spraying.  This was due to be carried out by two cousins, one of whom was equally against the unnecessary use of pesticides as us but initially felt obliged to do what the customer (our landlady) had requested. However, after some research, he came up with an alternative product with a far more wholesome ingredient list. The landowner was up for it but evidently with some reservations.

We knew nothing about olives nor what a good or bad crop looked like. Certainly, the trees next to the house which they had agreed not to spray at all were dropping a lot of beast-infested olives but elsewhere the olives looked ok ‘to our uninitiated eye at least’.

Harvest day came in October. This entailed laying plastic sheeting down below the trees whilst they were shaken vigorously by a machine. Beast-ridden or not the olives were bagged up and taken away for pressing.

I unconfidently mused as to whether we might be the recipients of our very own bottle of oil. Had the crop been compromised by the lack of bug zapping chemicals? Would we get short shrift from our landlady for being ‘picky’ Brits who had no idea about olive farming?

So, imagine our surprise when the landowner appeared at our gate with a six litre vat of cloudy unfiltered extra extra extra virgin olive oil with a big smile on her face.

Drum roll ………. Instead of the usual 3.5 tonnes of olives, this year the trees had produced 5 tonnes.

It is the softest, smoothest most delicious oil I have ever tasted. And being unfiltered, it will have the highest polyphenol content of all olive oils. They’re the protective antioxidant compounds which seem to partly explain the wonders of the Mediterranean diet

Talking to other local specialists and using a bit of common sense, I came to realise that, just as a broad-spectrum antibiotic kills both our good and bad gut microbes, so many herbicides fail to differentiate between creatures which live symbiotically with the trees and those which threaten them. However, by repelling potential attackers with less toxic products, the microbes and other insects which help to protect, pollinate and generally maintain the trees were left to do their job.

I wonder whether, had the ground beneath the trees not been devastated by herbicide, the crop would have been even better, because it’s not just what happens above ground that matters, of course.  There is another world down there of fungi and bacteria forming networks that not only exchange nutrients with the trees but also allow the trees to communicate with and share nutrients with their sister trees. There is a chapter in Braiding Sweetgrass by Robin Wall Kimmerer where she tells us how pecan trees either fruit together or not at all. If some trees are failing or under attack, the family of healthy surrounding trees nurses their ailing siblings by prioritising the provision of nutrients to them until they are all fit to fruit.

Was there ever a greater example of community over competition?

The other book I’m enjoying right now is The Overstory by Richard Powers. It is a compilation of short stories in which the main characters have a particular link with trees or a tree, either as a preference to the company of human beings, a cultural significance or precious ever-present family heirloom. Some stories also touch upon this ‘trees as a community’ theme, passing warnings of threats to enable their neighbours to raise their defences.

Next for me is The Hidden Life of Trees by Peter Wohlleben, a German forester, which, according to reviews, looks more deeply into how the ecosystem relies on communication between trees and surrounding wildlife for survival.

If you’re wondering why this dietitian has gone all tree-huggy then take a look at If Women Rose Rooted by Sharon Blackie. It transpires that in many ancient mythologies, women were considered the guardians of Nature and, when they hit a certain life stage, at which this dietitian finds herself, the urge to hug trees is apparently quite normal. Maybe that’s the real reason why we had so many olives this year!